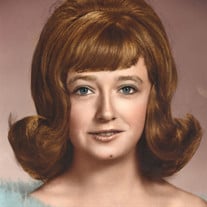 Darlene Kay Miller, age 66 of Blair, passed away August 3, 2017 at her home in Blair, Nebraska. Visitation will be held Friday, August 11, 2017 from 9:00 to 11:00 AM at Campbell Aman Funeral Home with memorial services following at 11:00AM. Graveside services will be held at a later date at the Herman Cemetery. Darlene was born on January 27, 1951 in Las Animas, Colorado the daughter of Robert and Donna Steele. She attended and graduated from Pueblo County High School. On August 28, 1976, she was united in marriage to Jerry W. Miller in Pueblo, Colorado. In 1983 the couple made their home in Blair. She was employed with Super Foods in Blair working in the deli. Darlene enjoyed puzzles, word searches and was an avid M&M’s collector. She is survived by her husband Jerry Miller of Blair, sons: CW4 Ronald D. Miller and wife Choi of Wahiawa, HI, Bobby A. Miller of Council Bluffs, IA, Jerry W. Miller Jr. of Blair, and Jeffrey E. Miller and wife Angie of Denver, CO; 11 grandchildren; 1 great-granddaughter; brother Dale Steele of Porter, TX; sisters: Christine (Bob) Bolton of Porter, TX, Beverley (Barry) Malone of Laguna Niguel, CA; nieces, nephews and many friends. She was preceded in death by her parents, sister Carolyn Murphy, and stepfather Jim Meacham. Memorials may be directed to the family.

The family of Darlene Kay Miller created this Life Tributes page to make it easy to share your memories.

Send flowers to the Miller family.