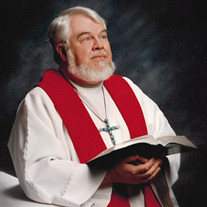 Rev. Daniel Thomas Moriarity, age 68 of Blair passed away on Thursday, May 25, 2017, due to complications following surgery, of a massive heart attack. He will be sorely missed by friends, colleagues and family. Well done, thou good and faithful servant. He now rests with his Lord and Savior. Funeral services will be held at 10:30 AM Wednesday May 31, 2017 at Trinity Lutheran Church in Blair. Visitation will be held Tuesday May 30, 2017 from 6:00 to 8:00 PM at Campbell Aman Funeral Home in Blair. Daniel was born on June 13, 1948 in Indianapolis, IN to Daniel King Moriarity and Bernice Irene (nee’ Gentry) Moriarity. He was the first born of four; one brother, Timothy I Moriarity, and two sisters: Jean Foster married to Dr. Peter Foster and Mary Elizabeth Bartos, married to Joseph Bartos. Daniel attended Warren Central High School in Indianapolis and graduated in 1966. He went on to Concordia University in Mequon, WI, Concordia Sr. College in Fort Wayne, IN, and finally Concordia Seminary in St. Louis, MO. In 1973 he fulfilled his vicarage obligation in Strasbourg, France and graduated as a full- fledged Pastor in 1974. He began creating his own family life in June of 1971 when he married Linda R. (nee’ Herrmann) Moriarity. They were blessed with two children; a son, Daniel David in 1973 and a daughter, Rebecca Ruth (nee’ Moriarity) Medley in 1974. Daniel is married to F. Miranda (nee’ Bourland). Rebecca is married to F. Jason Medley. Over the years Rev. Dan served in various congregations as a pastor: first at St. Paul Lutheran in Ann Arbor, MI, then St. Paul Lutheran in Phoenix, AZ, at St. Mark, also in Phoenix, AZ and at Ascension Lutheran in Torrance, CA. He was a gifted linguist who taught at Concordia Seminary in St. Louis, MO and later at Concordia University in Ann Arbor, MI where he taught Greek, Hebrew and Latin. He was asked to translate the first 5 books of the Bible for the God’s Word Bible and in retirement began to translate the periscopes for pastor’s. Sadly, his death has prevented him from publishing. Memorials may be directed to Trinity Lutheran Church in Blair, Nebraska.

Rev. Daniel Thomas Moriarity, age 68 of Blair passed away on Thursday, May 25, 2017, due to complications following surgery, of a massive heart attack. He will be sorely missed by friends, colleagues and family. Well done, thou good and faithful... View Obituary & Service Information

The family of Rev. Daniel Thomas Moriarity created this Life Tributes page to make it easy to share your memories.

Rev. Daniel Thomas Moriarity, age 68 of Blair passed away on...

Send flowers to the Moriarity family.