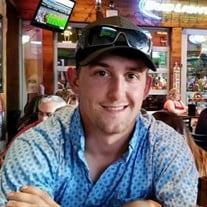 Cory Allen Moravec, 24 of Arlington, passed away Tuesday, August 8, 2017 at Nebraska Medicine in Omaha after a lengthy and courageous battle with lymphoma. Funeral services will be held Monday, August 14 at the Arlington Auditorium, at 10:30 AM. Graveside service will follow at the Arlington Cemetery. Visitation will be held Sunday at the Arlington Community Church, from 4 to 7 PM with a prayer service at 7PM. As a young boy Cory enjoyed “farming” with his toy tractors. He had quite a collection of red ones (from the Moravec side) and green ones (from the Shuster side). He never missed a chance to go to the farm and ride on a tractor, combine or the 4-wheeler! He loved being outside and was his dad’s shadow for many years. He liked helping his mom in the kitchen but only if he got to eat cookie dough or lick the brownie bowl! Cory and his sister, Katie, enjoyed playing ball outside, sledding, snowmobiling and playing with their dogs, Winston and Dakota. Indoor days were spent fighting over Legos or Cory having farming accidents over Katie’s Barbie’s. This resulted in many time-outs for the young lad! He was a regular attendee (with some prodding from mom and dad) of Sunday school, at the Arlington Community Church where he was also confirmed. He attended Arlington Public Schools from kindergarten through graduation. He was an honor student, scholar athlete and is a member of the Arlington Hall of Fame. Cory was active in sports where he enjoyed baseball and football, however, his passion was wrestling. He started wrestling at the age of 5, and through hard work, dedication, and determination, worked his way up to a 5th place state medal his senior year. He graduated in 2012 from Arlington High School with honors. Following this, he attended Northeast Community College in Norfolk, Nebraska earning his associate’s degree in diesel mechanics with high distinction. He served on a diesel program advisory board at the college since graduation. He worked in a co-op program at Titan Machinery in Fremont, Nebraska while attending college. He continued this employment after graduation until establishing his own business, Moravec Diesel Service, in rural Arlington. He also operated a cow/calf operation on the family farm. Cory garnered a few nicknames during his life that have stuck. As a preschooler Aunt Kathy named him “George”, he named her “Matilda. Classmates called him “COMO”. Cory enjoyed hunting, fishing, and working on his demolition derby cars that he took to county fairs. In his last year of being able to participate in derbies, he placed 1st at the Washington County Fair. He was awarded the “Mad Dog” prize at the Saunders County Fair as being the most aggressive demo derby driver on the track. He was a talented diesel mechanic and welder, building many of his own tools and equipment for use in his trade. What he loved most was his family and hanging out in the shop with his friends and his beloved shotgun-riding dog, Bo. Cory is survived by his parents, Keith Moravec of Arlington and Susie Moravec of Fremont. Sister, Katie Moravec of Papillion and his Labrador Retriever, Bo. Grandmothers, Julie Shuster of Blair and Beverly Moravec of Arlington. Aunts and uncles include Scott (Karen) Shuster of Rock Creek, WV, Sheryl (Troy) Rodgers of Elkhorn, Kent (Lisa) Moravec of Ithaca, Daryl (Kathy) Moravec of Howells, MI, Sharon (Scott) Thompson of Blair, Lori Moravec (Jeff Varhol) of San Francisco, CA, many cousins and a host of close friends including special friend Carly Lagasse of Omaha and dear friend Cassie Voss of Arlington. He was preceded in death by his grandfathers, Larry Moravec and Harvey Shuster, and cousin, Gracie Shuster. Memorials may be directed to the Moravec family for later designation.

Cory Allen Moravec, 24 of Arlington, passed away Tuesday, August 8, 2017 at Nebraska Medicine in Omaha after a lengthy and courageous battle with lymphoma. Funeral services will be held Monday, August 14 at the Arlington Auditorium, at 10:30... View Obituary & Service Information

The family of Cory Allen Moravec created this Life Tributes page to make it easy to share your memories.

Send flowers to the Moravec family.