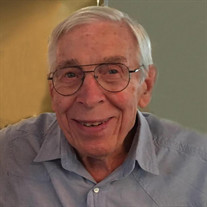 A memorial service for Corwin (Corky) F. Hayes, age 88, will be held Friday, July 6th, 2018 at 10:30AM at Trinity Lutheran Church in Blair. Visitation will be held Thursday July 5th from 6:00 to 8:00PM at Campbell Aman Funeral Home in Blair. Burial with military honors will be held at a later date at the Herman Cemetery in Herman, Nebraska. Corky died June 20, 2018 at Crowell Memorial Home in Blair. Corky was born May 1, 1930 on a farm in rural Decatur to Thomas Leo and Lillian (Busse) Hayes. He attended rural school in Decatur through 8th grade and farmed with the family until 1951. At that time, he was drafted into the US Marines. On December 23rd, 1951 he married Shirlene Score in Walthill, NE. After his honorable discharge in 1953, the couple made their home in Bertha where he was a farm hand for Byron and Vinton Johnson. In 1956, Corky enrolled in trade school in Omaha for Air Conditioning and Heating. The couple moved to Blair in 1957 where he was employed by Joe Moore Electric until starting his own business, Hayes Electric, in 1961. He was also the co-owner of Blair Artic Sales. Cork and Shirlene enjoyed many trips with their grandchildren as well as card club and snowmobiling with their many friends. He also enjoyed playing tennis and golf. He was a member of the Lions Club, Blair Fire and Rescue, and Trinity Lutheran Church. He leaves his family and friends with such great memories and taught us to be kind and loving. Corky is survived by his children, Valerie Hayes, Vickie (Doug) Cameron and Cyler (Dawn) Hayes, grandchildren Rachel (Kiel) Woodward, Erin (Phill) Smith, Kiley Cameron, Natalie Hayes and Lucas Hayes, as well as his great grandson, Desmond Montoya. He is also survived by his sister, Irma Senteney, sister-in-law Mary Jane Hayes, and brother-in-law LeRoy Evans. He was preceded in death by his parents, Leo and Lill, brothers and sisters-in-law, Maurive and Ruby Hayes, Glen and Mary Lou Hayes, infant Charles Hayes, and Harold Hayes. He was also preceded by his sisters and brothers-in-law Lucille and George Meade, Pauline and Melvin UpDike, Edythe and Clarence Svendsen, as well as his brother-in-law Robert Senteney and sister-in-law Rose Marie Evans. Pallbearers are his grandchildren Rachel Woodward, Erin Smith, Kiley Cameron, Natalie Hayes, Lucas Hayes and great grandson, Desmond Montoya. Honorary pallbearers are his nieces and nephews. The family would like to extend a special thank you to the staff at Crowell Home and Asera Care Hospice for their loving care. Memorials may be directed to the family. Campbell Aman Funeral Home is in charge of arrangements.

A memorial service for Corwin (Corky) F. Hayes, age 88, will be held Friday, July 6th, 2018 at 10:30AM at Trinity Lutheran Church in Blair. Visitation will be held Thursday July 5th from 6:00 to 8:00PM at Campbell Aman Funeral Home in Blair.... View Obituary & Service Information

The family of Corwin "Corky" Hayes created this Life Tributes page to make it easy to share your memories.

Send flowers to the Hayes family.