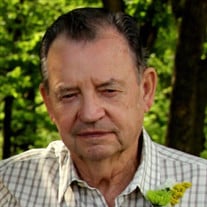 Clair McKinnis of Blair, NE, passed away March 2, 2020. He was born January 5, 1931 to Clarence and Ruth (Marr) McKinnis. After graduation he married his high school sweetheart, Gwen Sass, they were blessed with 65 years together. A skilled mason, Clair worked for Korshoj Construction until striking out on his own and forming McKinnis Construction. He was a model of what it means to live a life of service to others, most obviously shown by his active role in the Blair Fire and Rescue Squad. He joined the fire department in 1954 and was active more than 60 years. Clair was a charter member of Blair Rescue Squad, which formed in 1964. Following his actions during a fire at a Blair home, he was awarded the Knights of Aksarben’s Heroism Award in 1978. Clair’s faith was very important to him, both he and Gwen were active and devoted members of County Bible Church. Through the years, he was a steadfast attendee of countless Little League games, birthday parties and family outings. Later in life you could often find Clair working hard on a puzzle or gathered around a game table with his closest friends. Quick to pick up on the small, funny aspects of life, his sense of humor was always on display during a hand of Euchre or game of dominoes. Clair was preceded in death by his parents Clarence and Ruth, sister Lorraine, wife Gwen, son Danny and daughter Lori. He is survived by his sister Hazel Adams, brother Leroy McKinnis, sisters-in-law Lucille Ryan and Wanda Sass; daughter Lana (Pat) Thompson, son Dave (Kathy) McKinnis, son-in-law Tim Svendgard; eight grandchildren, 13 great grandchildren and many nieces and nephews. Funeral services will be held at 10:30 AM, Saturday, March 7 at Country Bible Church. Visitation will be held Friday, March 6 with family receiving friends from 5 to 7 PM at Campbell Aman Funeral Home. Memorials are suggested to Country Bible Church, Blair Fire Department or the Blair Rescue Squad.

Clair McKinnis of Blair, NE, passed away March 2, 2020. He was born January 5, 1931 to Clarence and Ruth (Marr) McKinnis. After graduation he married his high school sweetheart, Gwen Sass, they were blessed with 65 years together. A skilled... View Obituary & Service Information

The family of Clair Eldon McKinnis created this Life Tributes page to make it easy to share your memories.

Send flowers to the McKinnis family.