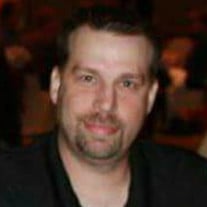 Christopher Troy Reed, a loving, devoted, and proud father, brother, and long time resident of Blair, NE, passed away unexpectedly on August 12, 2016. A Mass of Christian Burial is schedule for 10:00 AM on Wednesday, August 17th at Saint Francis Borgia Catholic Church in Blair, Nebraska. Visitation will be held Tuesday August 16th at Campbell Aman Funeral Home beginning at 4:00 PM, Family will receive friends from 6:00 to 8:00 PM with a Vigil at 6:30 PM. Preceded by his father, Milton Douglas Reed, Chris is survived by his mother, Patricia Rose Reed, his sister, Mary Pat (Harlen) Kittrell , brothers Doug (Carol), Eric, and Tom (Lisa) Reed, his two sons, Logan and Omri, significant other Stacy Shimerdla and numerous cousins, nieces, and nephews. Chris was born in Joplin, MO on November 12, 1967 to Douglas and Patricia Reed. At the age of five Chris and his family moved to Nevada, Iowa where Chris graduated from Nevada High in 1986. Chris attended Iowa State University before moving to Blair, NE in 2002 to start a career with NatureWorks, LLC. where he worked as a Senior Process Technician. Chris Reed was the youngest of his siblings but perhaps the most deeply passionate of his family. He passed that love of life and family on to his children, Logan and Omri. He loved art, particularly music and film, in all its forms. Growing up in the “original” Star Wars generation, he was a diehard fan and knowledgeable critic of the sci-fi genre. Chris was a chip-off-the-block from his father Milton Douglas Reed in his curiosity of all things mechanical, and shared his father’s passion for doing things with his own two hands. As creative and mechanically skilled as he was, his greatest gifts were his humility, empathy, and warm heart. Never one to boast, Chris’ quiet nature sometimes hid his formidable intellect, but there was no mistaking that he was a man who would do anything he could to help others. We will miss his quiet wit, mechanical and creative nature, but most of all his unconditional love for all those fortunate enough to know him.

Christopher Troy Reed, a loving, devoted, and proud father, brother, and long time resident of Blair, NE, passed away unexpectedly on August 12, 2016. A Mass of Christian Burial is schedule for 10:00 AM on Wednesday, August 17th at Saint Francis... View Obituary & Service Information

The family of Christopher Reed created this Life Tributes page to make it easy to share your memories.

Send flowers to the Reed family.