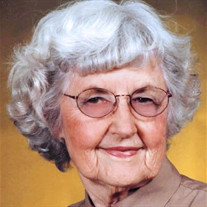 Charlotte Joy Christopher, age 97, of Blair, passed away November 16, 2016, in Denver, Colorado. Funeral services will be held at 2:00 p.m. Friday December 9, 2016, at the First United Methodist Church in Blair. Graveside services will follow at the Blair Cemetery. Charlotte was born on November 22, 1918, in Tripp County, South Dakota on the homestead of her father John G. Mackaman and mother Pet B. (Armstrong) Mackaman. She attended the one-room Liberty School, graduated from Colome High School in 1935 and received her teaching certificate from South Dakota Southern State College. She then went back to the Liberty School and taught. Charlotte married Michael Christopher on May 26, 1941, in Winner, South Dakota, where they made their first home. In 1942, they moved to Blair, where Mike worked for the Templeton Ford Garage. Charlotte and Mike had their four children in Blair and Charlotte was a homemaker as Mike started and operated Christopher Body Shop with his brother, John. Charlotte took a great deal of pride and satisfaction in her community participation, crafts and hobbies. She was a member of the Washington County Extension Clubs and the First Methodist Church Circle groups. She volunteered for many years at the Crowell Home and Blair Memorial Hospital. Sewing was a lifetime passion and she was an excellent seamstress. And she was a regular at the ladies’ round table at the Maple, one of many places where her sharp wit and humor were shared. Mrs. Christopher is survived by her children: Judy (Michael) Wilkin, Rocky (Barbie) Christopher and Joi (Don) Oppliger; grandchildren: Michael (Tanya) McCoy, Molly (John) Williams, Tessa Wilkin, Mia Wilkin, Anna (Tony) Perret-Gentil, Alison (Jeff) Jockel, Stefan Christopher, Ben Oppliger (Katie); and great-grandchildren: Cal, Cole and Alexa McCoy, Connor and Charlotte Williams, Remi and Enzo Perret-Gentil and Madison Oppliger. She was preceded in death by her parents; her six siblings, Dwight, Alden, Alice, Ellen, Sadie and Paul; husband, Michael; daughter, Jane Marie; and grandson, Grant Oppliger. Memorials may be directed to the First United Methodist Church, the Crowell Memorial Home or Memorial Community Hospital in Blair.

The family of Charlotte Joy Christopher created this Life Tributes page to make it easy to share your memories.

Send flowers to the Christopher family.