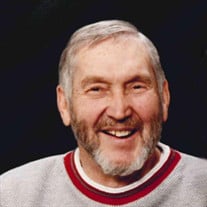 Mr. Charles Elbert Akes, age 81 of Blair, died November 18, 2016 at Immanuel Hospital in Omaha. Funeral services will be held Tuesday November 22, 2016 at 11:00AM at Living Hope Church of Blair, Nebraska. Graveside services will follow at the Pioneer Cemetery. Visitation will be held Tuesday at the church beginning at 10:00AM. Charles Akes was born on November 6, 1935 in Clarinda, Iowa the son of James and Ruth Akes. He was raised in Clarinda and attended school there. On September 7, 1954 he was united in marriage to Joyce Freeman in Sidney, Iowa. The couple was blessed with two daughters Tory and Tammy. The family lived in Iowa until 1977 when they made their permanent home in Blair. Charles was a long time employee of Dana College working in the maintenance department. Charles always put the Lord first in his life, and dedicated himself to his wife and family. Everyone was drawn to his gentle and loving spirit. He was never at a loss to share a joke with his family, friends or a stranger. Charles enjoyed spending time with his family, especially his grandson Samuel, and going fishing. Mr. Akes is survived by his wife of 62 years Joyce of Blair, daughters Tory Steffen of Blair and Tammy (Bradley) Roth of Omaha, grandson Samuel Roth of Omaha, sisters Ruby Thompson of Ankeny, Iowa and Shirley White of Shenandoah, Iowa, sister in law Mary (Ken) Lauridsen of Henderson, Iowa, along with many nieces and nephews. He was preceded in death by his parents, son in law Lynn Steffen, brother Eldon Akes, sisters Pauline Scott, Thelma Severns, Nettie Bissell and Daisey Blair. Memorials may be directed to the Akes Family.

The family of Charles Elbert Akes created this Life Tributes page to make it easy to share your memories.

Send flowers to the Akes family.