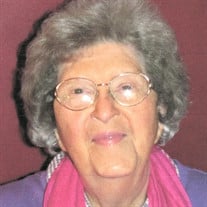 Catherine Elizabeth (Mock) Andrew died peacefully Sunday, April 16, 2017 at her home in Herman, Nebraska. Visitation will be held Friday, April 21 at the Herman Community Church from 5 to 7 PM with a prayer service at 7 PM. Funeral Service will be Saturday, April 22 at 10:30 AM at the American Legion Hall in Herman. Burial will follow in the Herman Cemetery. Catherine was born in Ryegate, Montana on December 4, 1916, to Dr. Clarence Everett Mock and Marguerite Ellen (Denton) Mock. She grew up in her early years at Kennard, Nebraska moving with the family to Ulysses, Nebraska her eighth grade year and graduated from Ulysses High School in 1934. Catherine graduated as the class valedictorian and was awarded the Nebraska Regents Scholarship. Catherine married Terrance Edwin Andrew on April 10, 1938 at the United Methodist Church in Ulysses, Nebraska. They resided in Ulysses until Terrance took a job at the Martin Bomber Plant in Bellevue, Nebraska. Terry enlisted in the armed services later when the U.S. entered WWII and Catherine followed him around the country wherever he was stationed. After Terry’s discharge from the service they returned to Ulysses and started a family. In 1947 they moved to Herman, Nebraska where they remained until their passing. Catherine and Terry had two sons, Terrance Robert (Jonnie) Andrew of Herman, Nebraska and James Clarence (Joan) Andrew of Tekamah, Nebraska. Catherine worked for over twenty years at the Bill Peck Insurance Agency in Herman and was always active in her community. Catherine taught Sunday School for over sixty-five years and served on the church board for many of those years including being a church delegate to the Methodist District. Other interest included the Easter Star where she held many positions including that as a Grand Representative, a Washington County Republican Party Woman, the American Legion Auxiliary and the Methodist Church Guild. Catherine loved following Herman and later Tekamah-Herman basketball watching both of her sons and later following grand and great grandchildren wherever they lived. Catherine always said that her most important interest however, were the Lord Jesus Christ, her family and friends. Catherine was preceded in death by her parents, husband and sisters Francis (Marshall) Pastory, Margy (Hollis) Carlson, brothers Bud and Bob (Pat) Mock, brother-in-law Dwayne Moore, Anson Moore, sister-in-law Thelma (Eril) Johnson, Gwendolyn (Ted) Grigsby, Ardythe (Verlin) Gronlund and Loretta Moore. She is survived by her sons, sisters-in-law: Donna Mock, Aloha Moore and Zora (Dale) Sieck. Brother-in-law Duard Moore, seven grandchildren: Mickey Ferguson, Mike Andrew, Marti DiVita, Juliet Jensen, Kristen Feiling, Nicholas Andrew and Christian Andrew; eighteen great grandchildren; nieces and nephews, friends and neighbors. Memorials may be directed to the family for later distribution to charities of the family choice.

Catherine Elizabeth (Mock) Andrew died peacefully Sunday, April 16, 2017 at her home in Herman, Nebraska. Visitation will be held Friday, April 21 at the Herman Community Church from 5 to 7 PM with a prayer service at 7 PM. Funeral Service will... View Obituary & Service Information

The family of Catherine Elizabeth (Mock) Andrew created this Life Tributes page to make it easy to share your memories.