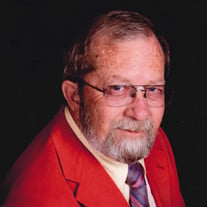 Carl William Mackie, 74 of Blair, passed away August 27, 2017 at his home. Funeral services will be held Thursday, August 31, 2017 at 10:30 AM at First United Methodist Church in Blair. Visitation will be held Wednesday starting at 3 PM with family receiving friends from 6 to 8 PM at Campbell Aman Funeral Home. Carl William Mackie was born in Laramie, Wyoming on September 17, 1942 to William and Jean (Sugden) Mackie. He passed away on August 27, 2017. Carl graduated from North High in 1960 and Dana College in 1965 with a Bachelor’s degree in education. He taught art at Tri Center High School for 10 years, then worked for Sapp Bros. He also held jobs with Interstate Harvester, Midwest Messenger in Tekamah and the River Wilds Golf Course in Blair. He enjoyed fishing, pheasant hunting, bowling, golfing and dancing. He was a baseball coach for his sons and a softball coach for his daughters. Carl was involved with Blair Community Theater and an active member at the First United Methodist Church; having been a Sunday School superintendent and teacher for 40 years. One of his most loved activities was watching his children and grandchildren at their various activities. Carl is survived by his wife Lonne of Blair; children: Elizabeth (John) Tyson of Herman, Michael (Holly) Mackie of Blair, Matthew (Kim) Mackie of Omaha and Sarah (Scott) Jensen of Blair; grandchildren: Joel Tyson (Amy Rempe), Zachary (Trisha) Tyson, Cody Tyson (Ashley Gobel), Eric Tyson, Zane Boswell, Ashton Tranmer, Hannah Mackie, Madison Mackie; great granddaughters: Thea and Isla Tyson and Bryleigh Tyson; sister Joyce (Lee) Carlsen of Arkansas; niece Candice Carlsen of Arkansas; many cousins and friends. He was preceded in death by his parents and nephew David Carlsen. Memorials may be directed to the First United Methodist Church in Blair, NE.

Carl William Mackie, 74 of Blair, passed away August 27, 2017 at his home. Funeral services will be held Thursday, August 31, 2017 at 10:30 AM at First United Methodist Church in Blair. Visitation will be held Wednesday starting at 3 PM with... View Obituary & Service Information

The family of Carl William Mackie created this Life Tributes page to make it easy to share your memories.

Send flowers to the Mackie family.