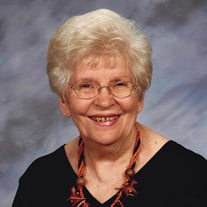 Berniece Sheets was the youngest child of Herman and Emma Tillwick, born on July 30, 1928 in Omaha, Nebraska. She had one brother, Ray Tillwick. Berniece attended Cross Lutheran School through 8th grade and graduated from South High. She attended one year of college in Omaha studying textiles. Berniece met George Sheets Jr. at a dance in Arlington. They were married November 26, 1950 at First Lutheran Church in Omaha. They had four daughters: Carol (Greg Allison), Luann (Russell Madsen), Linda (Ken Tiffey) and Sally (Rodger Engebrethson). She had nine grandchildren: Georjeanna Tiffey Baxter, Rodney Madsen, Mandy Tiffey, Adam Madsen, Kendra Tiffey Walker, Luke Allison, Rebecca Allison, Ryan Engebrethson and Sara Engebrethson and eight great-grandchildren: Morgan Baxter, Emmily Tiffey, Austin Madsen, Tyler Reizn, Roselynn Madsen, Jaxson Walker, Ava Allison and Josie Allison. Her life was centered around raising her 4 daughters until they were on their own. She was a 4-H leader for many years for her youngest daughter. Berniece’s passions were playing bridge, sometimes up to 3 days a week. She was able to play bridge about twice a month up until February this year. She was a beautiful seamstress, enjoyed quilting, knitting, crocheting, gardening and loved watching the birds and whistling back to them. She loved going to the Chatt Center the first Monday of the month to play Pitch. Berniece was very active at First Lutheran Church and attended classes to become a Stephen Ministries Leader and active in Adult Bible Study. She loved traveling and went on several trips which included Australia, Canada, Caribbean, California, the Northeast to see the fall colors, Florida and many other states. She will be truly missed by many people as she was such a sweet, caring lady that always cared for others and never wanted to ask for help. Memorials are suggested to the Blair Rescue Squad.

Berniece Sheets was the youngest child of Herman and Emma Tillwick, born on July 30, 1928 in Omaha, Nebraska. She had one brother, Ray Tillwick. Berniece attended Cross Lutheran School through 8th grade and graduated from South High. She attended... View Obituary & Service Information

The family of Berniece Deloris Sheets created this Life Tributes page to make it easy to share your memories.

Berniece Sheets was the youngest child of Herman and Emma Tillwick,...

Send flowers to the Sheets family.