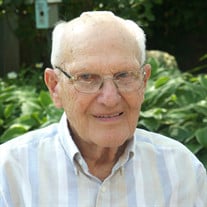 Benjamin (Ben) Edward Fischer age 97 of Blair, passed away February 20, 2017 at Nye Legacy in Fremont. Funeral services will be held Saturday February 25, 2016 at 10:30AM at Campbell Aman Funeral Home in Blair. Burial will follow services in the Blair Cemetery. Visitation will be held Friday, February 24 from 6:00 to 8:00PM at Campbell Aman Funeral Home. Benjamin (Ben) Edward Fischer, 97, son of Ernest and Anna Fischer, was born on January 26, 1920. He was born and raised on a farm in Washington County, Nebraska, 4 miles west of Spiker. He went to Brandt Grade School and graduated from Hooper High School. Ben was drafted into the Army Air Corps in November 1941 and served through November 1945. Ben served with the 1st Fighter Control Squadron during WWII in the pacific. On November 11, 1943, Ben received the Purple Heart when on a lone troop transport ship, the Cape San Juan, heading to Australia, was torpedoed and sunk by a Japanese submarine some 300 miles from Fiji Island. After 30 hours on a raft, he was rescued and following hospital covalence in Fiji and Brisbane, Australia he went on to see action in New Guinea and then in the Philippines. After the war, Ben returned to Nebraska to work with the Washington County Road Department and got an amateur radio license that became a lifelong hobby along with fishing. He and his brother Louis successfully built and raced a championship stock car in Arlington, NE. He married Esther Hansen on July 25, 1957 in Blair and he began work with Hunt Telephone Company. Ben and Esther moved to Creighton, NE in 1963 where he retired from Great Plains Telephone company in 1985. Ben and Esther enjoyed their retirement years traveling with their camper and meeting people all over the United States. Ben returned to Blair in 2011. Ben and Esther had three children, Curtis (Lucy), Joyce and Gail. Ben died on February 20, 2017 in Fremont, Nebraska. He is survived by his three children, grandchildren Nathan (Katie) and Kelsey (Andrew), four great-grandchildren and a brother, Louis Fischer. Ben was preceded in death by his wife Esther, his parents Ernest and Anna, and his brothers Robert, Donald, Eugene and Howard.

Benjamin (Ben) Edward Fischer age 97 of Blair, passed away February 20, 2017 at Nye Legacy in Fremont. Funeral services will be held Saturday February 25, 2016 at 10:30AM at Campbell Aman Funeral Home in Blair. Burial will follow services in... View Obituary & Service Information

The family of Benjamin Fischer created this Life Tributes page to make it easy to share your memories.

Send flowers to the Fischer family.