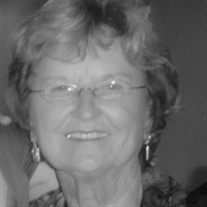 Audrey Rose (nee Barta), age 90, died on December 15, 2017, at Good Shepherd Lutheran Community in Blair, Nebraska. Audrey is survived by her husband, Wally Rose, and five children, Kandy (Scherer) Imes (Dave), Judy (Scherer) Connealy (Matt), Tim Scherer (Mary Grace), Kevin Rose and Kathy Rose, seven grandchildren and eight great-grandchildren, her sister, Melvina Dinklage, her brother and sister-in-law, Bud and Rita Barta and many nieces and nephews. She is preceded in death by her first husband, Ronnie Scherer, her parents, Frank and Anna Barta, her brother, Richard Barta, her sister, Gladys Karel, and two nephews, David Karel and Adrian Barta. Audrey was born at home on Valentine’s Day in1927 near Howells, Nebraska to Frank and Anna Barta. She graduated from Howells High School in 1946 and then from St. Joseph’s Nursing School in 1949. Audrey’s life’s work was as a registered nurse. She worked as a hospital nurse, a medical clinic nurse, a school nurse and also did private nursing for the terminally ill. Audrey was a loving wife, mother, grandmother and friend. She danced with Wally, raised her kids to be strong and independent, played with her grandchildren, talked to her beloved pet, Kitty Rose, and laughed heartily with her friends. Audrey cared deeply for the sick and those who grieved. The funeral is Wednesday, Dec. 20 at St. Peter’s Catholic Church in Stanton, Nebraska. The rosary will be said at 10:30 and the funeral mass will follow. In lieu of flowers, the family asks for memorials to be sent directly to the Fremont Area Alzheimer’s Fund, 1005 E. 23rd, Suite #2, Fremont, NE 68026 or donate online at www.facfoundation.org

The family of Audrey Rose created this Life Tributes page to make it easy to share your memories.

Send flowers to the Rose family.