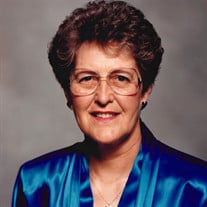 Audrey Joyce Jones was called Home to be with the Lord on Sunday, August 13, 2017. Memorial services will be held Saturday, August 19 at 2 PM at Good Shepherd Lutheran Home Chapel in Blair, Nebraska. Audrey Joyce Jones was born June 19, 1932 in Milbank, South Dakota. She was raised with two brothers, Gordon Hamman and Duane Hamman and two sisters, Patricia Mahler and Linda Cloud. She attended school in the Milbank area graduating from Milbank High. They were a hard working family, gardening and camming fruits and vegetables, sewing their own clothes and helping neighbors as needed. She had classic stories about walking to school, uphill both ways, in the terrible cold and snowy South Dakota winters. She attended a one room school house during her elementary years. She raised four children: Michael, Brenda, Brian and Robert. All had their jobs to do at home. Audrey was a clean fanatic so much was expected with dusting, vacuuming or just cleaning up after their selves. She raised her children much the way she was, helping neighbors pick peaches, mow grass, scrub floors, babysit, do laundry or whatever was needed. The family lived in the Russian bottoms in Lincoln for a time where they were part of a very close knit community. Audrey started working outside of the home in 1969 at Russell Stover’s. She was a very popular neighbor as she could purchase “seconds” for three pounds for a dollar. She was a union representative which allowed her to travel the U.S. to attend meetings. When Stover’s closed she started working for the University of Nebraska, custodial services. She had found her niche! She was voted employee of the year several times and worked her way up to supervisor very quickly. She enjoyed grandchildren and great grandchildren, planning flowers, crafts, ironing, traveling, shopping, reading, puzzles, collecting owls and carousel horses and was a Husker fan. S he was a Lincoln resident for most of her adult life. She moved to the Good Shepherd Lutheran Home in Blair, Nebraska 3 ½ years ago. They enjoyed her humor and silly sayings like “I calls ‘em like I sees ‘em”. She called Bruce her favorite son-in-law. He was her only son-in-law. She loved to share stories about farm life, working at Russell Stover’s and bragging about her children and grandchildren whit the residents and nurses. Audrey is survived by her children: Michael (Tess) Flury, Brenda (Bruce) Harris, Brian Flury and friend Marcia Therribolt; sisters Patricia Mahler and Linda Cloud; brother Gordon Hamman; 7 grandchildren and 12 great grandchildren. She was preceded in death by her parents Phillip and Violet Hamman, husband Graham M. Flury and Eugene Jones, long time friend Marvin Dreeszen, brother Duane Hamman and son Robert V. Flury

The family of Audrey Joyce Jones created this Life Tributes page to make it easy to share your memories.

Audrey Joyce Jones was called Home to be with the Lord on Sunday,...

Send flowers to the Jones family.