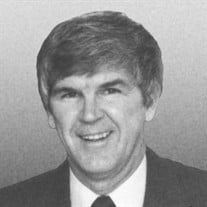 On Saturday, June 2nd at 9:00 am there will be a meeting of friends and family over refreshments at the Fellowship Hall at First Lutheran Church in Blair, Nebraska. Then at 10:30 am a Memorial Service will be held at the church to honor the life of Dr. Arvin Quist. Paster Scott Frederickson, PhD. Will be officiating. Dr. Arvin Sigvard Quist, long-time resident of Oak Ridge, Tennessee, died February 1, 2018, at his home surrounded by family, after a brief battle with cancer. He was born November 15, 1933 and was raised on a farm in eastern Nebraska near the town of Blair. Graduating High School at the age of 16, he attended Dana College, graduating with a B.S. in Chemistry in 1954. He obtained his M.S. in Chemistry in 1957 and his Ph.D. in Chemistry in 1959 from the University of Nebraska. In 1975 he obtained a Law Degree from the University of Tennessee. Dr. Quist came to Oak Ridge in 1961 and initially worked as a research chemist at the Oak Ridge National Laboratory for many years. He authored numerous technical publications and obtained several patents. He spent a year with his family in Karlsruhe, Germany in the late 1960s on a scientific exchange. He retired from DOE’s Oak Ridge operations in 1998 as the Head Classification Officer for Oak Ridge National Laboratory and the K-25 Gaseous Diffusion complex. Later that same year he formed Oak Ridge Classification Associates where he continued his work related to classification. He authored a multi-volume work, still regarded as a primary authority, on the history and principles of information classification. Until his death he continued to serve as one of the nation’s experts on uranium enrichment classification, authoring many other works on that and related subjects. Dr. Quist is survived by his brother Darvid Quist; sister LaVonne Rolland; sister-in-law Edith Lamb; son Erik Sigvard Quist and his wife Stephanie; son Brian Conal Quist and his wife Molly; son Mark Gunnar Quist and his wife Michele; granddaughter Mary Katrina Rouse and her husband Preston Rouse; grandson Brian Anderson (Andy) Quist; grandson Erik Alexander (Alex) Quist; granddaughter Colette Blythe Clara Quist; step-son Dr. Christoffer E. Poulson and his wife Lindsey and children, Eadie, Evan and Ellen; step-daughter, Deborah Poulsen Harmon and children, Danyelle and Neyland; many nieces and nephews; and his cat Sheldon. Dr. Quist was preceded in death by his wife Dodie Quist; second wife Joan, his parents Alfred Sigvard and Clara Andersen Quist, and his brother Quentin Quain Quist. Dr. Quist enjoyed spending time with his family, planting daffodils, ancestry research, collecting, reading, playing poker with friends, completing the crossword puzzle each day, and attending his children’s and grandchildren’s sporting events, plays, art shows, dance recitals, and ballet performances. He was a supporter of public radio and television and the local arts, including the theater work of his first wife, Dodie, and the chorus work of his second wife, Joan. Always active, he jogged, played tennis, and for several decades he annually hiked Mt. Le Conte. A member of the Oak Ridge Sportsman Association since his arrival in Oak Ridge, he was an expert marksman, winning many awards including a national long-range team championship in the late 1960’s. He also recently qualified to compete this summer at the State Senior Olympics in the Javelin, Softball Throw, Long Jump, and High Jump by winning his age-group in each event. He still holds the intramural record for the Javelin at the University of Nebraska. Dr. Quist was a truly remarkable man who lived a truly remarkable life. He was regarded by his children, grandchildren, and most all who knew him, as the smartest and kindest man they ever met. A service for Dr. Quist will take place at 3:00 p.m. Saturday, February 10th, 2018 at United Church, The Chapel on the Hill, 85 Kentucky Avenue, Oak Ridge, Tennessee immediately followed by a gathering at The Chapel on the Hill’s Fellowship Hall where the family invites attendees to celebrate Arvin Quist’s extraordinary life.

On Saturday, June 2nd at 9:00 am there will be a meeting of friends and family over refreshments at the Fellowship Hall at First Lutheran Church in Blair, Nebraska. Then at 10:30 am a Memorial Service will be held at the church to honor the... View Obituary & Service Information

The family of Dr. Arvin Sigvard Quist created this Life Tributes page to make it easy to share your memories.

Send flowers to the Quist family.