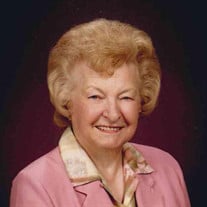 Arlene Ellen Robinson, age 90, passed away February 7, 2017 at Memorial Community Hospital in Blair. Funeral services will be held Friday, February 10, 2017 at 10:30 AM at First United Methodist Church in Blair, Nebraska. Graveside services will follow at the Blair Cemetery. Visitation will be held Thursday, February 9 from 6:00 to 8:00 PM at Campbell Aman Funeral Home in Blair. Arlene was born on April 18, 1926 in Orum, Nebraska the daughter of Arthur and Ellen (Lund) Jensen. She was raised in Kennard and graduated from Kennard High School. She was united in marriage to Arthur S. Robinson. The couple made their home in Blair, Nebraska. Arlene has been a resident at Good Shepherd Lutheran Community for the past few years. Arlene was an active member of the First United Methodist Church and served as a Sunday School Teacher, a Circle member, and served at many church events. She was also a member of the Women’s Auxiliary. Arlene belonged to the U-Name-Us Pinochle Club for over 60 years. She enjoyed having coffee with her many friends, which always included a plate of cookies or coffee cake. Her greatest joy in life was being surrounded by her family, and she attended as many family events as possible. Arlene was preceded in death by her parents, Arthur and Ellen Jensen, and her husband Arthur S. Robinson. She is survived by her children; Patricia Robinson of Tucson, AZ, Rita Wilkins of Blair, NE, Cindy Conn of Lincoln, NE, Carol (David) Heinke of Nebraska City, NE and Robert (Kathleen) Robinson of Omaha, NE; grandchildren; Walker (Andrea) Wilkins, Max (Rebecca) Wilkins and their daughters Paisley and Ellie and son Gabriel, Cassie Gibson and son Kingston, Hailey Robinson, Rylan Robinson, Joshua Matzen and Ethan (Nakisha) Conn; sister Gladys (Don) Watts, nieces, nephews, cousins and friends. Memorials may be directed to Good Shepherd Lutheran Community in Blair or First United Methodist Church in Blair.

The family of Arlene Ellen Robinson created this Life Tributes page to make it easy to share your memories.

Send flowers to the Robinson family.