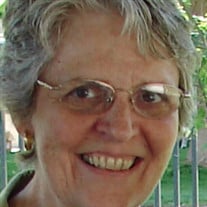 Ann K. (Tinnel) Gregerson entered into the arms of her Lord & Savior, Jesus Christ, on November 27, 2020. A private family service will be held this week, with a Celebration of Life Service planned for next spring. Ann was born in Council Bluffs, IA, on May 21, 1941, to Ervin (Brock) and Marianne (Griffin) Tinnel. She grew up in Council Bluffs, graduating from Abraham Lincoln High School in 1959, where she played the clarinet in the marching band. Upon her high school graduation, Ann attended Methodist School of Nursing and earned her Registered Nursing license in 1961. She worked at various hospitals during her husband’s military career before beginning part time at Memorial Community Hospital in Blair, NE, in 1972. Once her children were in school full time, Ann worked full time, largely working in the emergency room at Memorial Community, until eventually becoming the hospital’s discharge planner. During her time in Blair, she helped train many volunteer rescue squad members and, later, was instrumental in developing the Life Line Unit program for the hospital. Ann married her blind date who “wouldn’t go away,” Jean Gregerson, on November 2, 1962, in Shreveport, LA, after their wedding was canceled due to his military travel restrictions. Together they had three children, Kelli, Keith and Paula. Upon Jean’s retirement from the Air Force, they moved the family back to his family farm near Bennington in 1972 and lived there until health reasons prevented them from staying in the country any longer. A beloved daughter, sister, wife, mother, aunt, grandmother and friend, Ann will be remembered by all for her sweet and compassionate spirit. She spent all of her life caring for others, particularly praying with and talking with those whom she sensed needed help. Upon her retirement from the hospital, she spent many hours counseling and ministering to people though various outlets. Her favorite “people,” though, were her kids and grandkids whom she lavished with her care, prayers and love. Her family holds precious the phrase with which she used to sign every card and email and to end every phone call: “Love you more!” Ann is survived by her children, Kelli (Brian) Bentley, Keith (Kristi) Gregerson and Paula (Scott) Wedel; grandchildren, Erik (Shannon) Wedel, Alyssa (Spencer) Krogh, Brittnie Wedel, Zach (Kelsey) Gregerson, Chase Gregerson, Lyndsie (Jordan) Ferraro, Brendan Bentley, Anna Gregerson, Grace Bentley, Jakob Wedel and Claire Bentley; great grandson, Jack Krogh; sisters, Sally (Scotty) Smith and Peggy (Jerry) Williams; brother, Jack (Pat) Tinnel; niece, nephews and many dear friends. She is preceded in death by her husband Jean, parents, and parents-in-law. Memorials may be directed to Assure Woman’s Center or the Open Door Mission.

Ann K. (Tinnel) Gregerson entered into the arms of her Lord & Savior, Jesus Christ, on November 27, 2020. A private family service will be held this week, with a Celebration of Life Service planned for next spring. Ann was born in Council... View Obituary & Service Information

The family of Ann K. Gregerson created this Life Tributes page to make it easy to share your memories.

Ann K. (Tinnel) Gregerson entered into the arms of her Lord &amp;...

Send flowers to the Gregerson family.