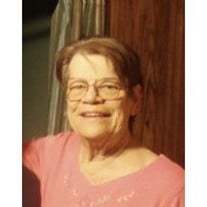 Memorial services for Anita Arlene Latwaitis, “Arlene” age 69 of Blair will be held at 2:00PM Saturday, April 13th, 2013 at Campbell Aman Funeral Home in Blair. Arlene passed away on April 5th, 2013 at her home in Blair. Anita Arlene Latwaitis, “Arlene”, was born on August 3rd, 1943 in Freeport, Long Island, New York to J. David Higgins Jr. and Anita Erma (Wyss) Higgins. She attended Sanford H. Calhoun High School in Merrick, New York, and then worked for the telephone company and later Republic Aviation Corporation. She married Alfred Latwaitis, Jr. in 1963, and together they started several businesses. She worked as the business manager at Trophy Hut in New York and Microsmart in Blair. She is survived by their children, Ted and Candy Latwaitis, Holly Latwaitis and Tim Smith, her grandchildren, Hope and D.J. Latwaitis and Alita, Taylor, and Dylan Smith all of Blair, NE, her brother, J. David Higgins and his wife, Cecile of Modale, IA, and her extended Latwaitis and Higgins families of Nebraska, New York, and Colorado. She was preceded in death by her husband, Al, and her parents, Ann and David Higgins. Arlene will always be remembered for her love of and devotion to family.

The family of Anita "Arlene" Latwaitis created this Life Tributes page to make it easy to share your memories.

Send flowers to the Latwaitis family.