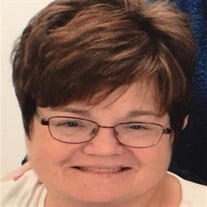 Angela Ellen Campbell, age 49 of Fremont, Nebraska passed away April 7, 2018 at Lyons Living Center in Lyons, Nebraska. Funeral services will be held Tuesday April 10, 2018 at 10:00AM at First United Methodist Church in Fremont, Nebraska. Graveside services will follow at the Blair Cemetery. Visitation will be held Monday April 9, 2018 at Campbell Aman Funeral Home in Blair with family receiving friends from 6:00 to 8:00PM. Angela was born on December 15, 1968 in Blair, Nebraska the daughter of LeRoy and Lois (McIntosh) Campbell. She attended Blair Schools and graduated in 1987. During her time in High School she was active in Band and the Medical Careers Club. She attended UNO where she received her bachelor’s degree in general studies and then attended Bellevue University where she obtained her bachelor’s degrees in Accounting and Human Resource Management. Angela most recently worked at Cargill as a customer service representative. In 2009 the joy of her life Gabriel was born. Angela was a member of First United Methodist Church in Fremont. Angela is survived by her son Gabriel, brothers and sisters; Kevin (Cathy) Campbell, Kent Campbell, Michelle Majors, Andrea Campbell and Tricia (Mark) Thibodeau, nieces and nephews; Kendra (Brad), Bridget (Zach), Erin (Steve), Brandon (Rachel), Brittany, Christina, Daniel, Katherine and Rachael, her aunt Gladys Jensen and uncle Jerry Campbell, along with many great nieces and nephews. She was preceded in death by her parents LeRoy and Lois Campbell, brothers Michael and Dirk and brother in law Roy Majors Memorials may be directed to the family for later designation.

The family of Angela Ellen Campbell created this Life Tributes page to make it easy to share your memories.

Send flowers to the Campbell family.