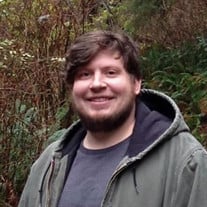 Andrew Ulrich Ronning, 32, of Lincoln, NE, passed to his heavenly home on May 13, 2020. Andrew was born to Richard and Laura Ulrich Ronning on February 28, 1988 in Lincoln, NE. He grew up in Blair, NE, graduated from Blair High School in 2006, and attended the University of Nebraska–Lincoln. He later resided in Portland, OR, and attended Portland Community College. Andrew was gentle, intelligent, funny, and kind. He especially enjoyed nature, hiking in the mountains, and spending time at the Pacific Coast. Some of his favorite memories were of spending time with family in Nebraska and at Enemy Swim Lake in South Dakota. He also enjoyed history and reading. He was an excellent cook both professionally and at home. Family was important to him, and he loved being Uncle Andy to Sonja, daughter of his sister, Rachel Ronning, of Portland, OR. Survivors include: parents Richard and Laura Ulrich Ronning, sister Rachel Ronning, and niece Sonja Ruthie. Also survived by his aunts Kari Ronning and Kip (Stan) Schwarzkopf, both of Lincoln; Ruth Ulrich and Elizabeth (Frank) Thompson, Ft. Myers, Fla., and Linda (Dave) Ulrich Miller of Waverly. Other survivors are first cousins Gavin and Nicholas (Tiffany Rojas) Donaldson, Marit (Sven) Derichs, Seth (Elizabeth) Schwarzkopf, Lisel (Gregg) Stearns, Anne Thompson, and Kate Kimmons, as well as second cousins Austin, Jakob, Elise, Gabriel, Isaac, River, Louisa, and Freya. He is also survived by special friend, Melissa Beelek. Andrew was preceded in death by his grandparents, Royce and Ruth Ronning and Walter and Martha Ulrich, and uncle, James Ulrich. Andrew will be greatly missed by all who knew him. Due to the current situation with COVID-19, a memorial service will be held at a later date at Country Bible Church, near Blair. Campbell-Aman Funeral Home, Blair, NE, is in charge of funeral arrangements. Memorial gifts will be directed to Bryan Independence Center, Lincoln, NE.

Andrew Ulrich Ronning, 32, of Lincoln, NE, passed to his heavenly home on May 13, 2020. Andrew was born to Richard and Laura Ulrich Ronning on February 28, 1988 in Lincoln, NE. He grew up in Blair, NE, graduated from Blair High School in 2006,... View Obituary & Service Information

The family of Andrew Ronning created this Life Tributes page to make it easy to share your memories.

Andrew Ulrich Ronning, 32, of Lincoln, NE, passed to his heavenly...

Send flowers to the Ronning family.