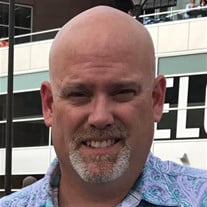 Andrew Dwain Andreasen died unexpectedly on December 5, 2019 in Blair, NE. Services will be 11 a.m. Thursday, December 12, 2019 at Country Bible Church, Blair NE. Visitation will be Wednesday, December 11, 2019 at Campbell-Aman Funeral Home in Blair from 6 to 8 p.m. Andrew was born on February 19, 1973 to Roger and Donna (Crone) Andreasen at Blair Memorial Hospital. He grew up in Blair and graduated from Blair High School in 1991. He continued his education at Southeast Community College at Milford, NE with a degree in John Deere Ag Tech. He worked at John Deere in Bennington and Missouri Valley while farming with his dad and grandpa Neal. Later he had his own farm repair shop at his residence. On December 1, 2006 he and his wife, Shelly, opened Andy’s Mow Town. Andy poured his heart and soul into this business for 13 years and built a successful small engine sales and service shop serving the Blair and surrounding area. Andy was also passionate about serving his community. He was currently serving on the Washington County Board. He was also a member of FFA Alumni and was a strong supporter of agriculture. He is survived by his loving wife, Shelly; children Nate (Heather) Andreasen, Craig (Holly) Andreasen, Brandon (Tonya) Andreasen, Josh and Faith; grandchildren Landen, Klaire, Eden,Elliott, Kaelynn, Ella, Emerson, Aubree and Elmer. Parents, Roger and Donna Andreasen; sisters Audra & Karen; grandmother Viola Crone; and aunts, uncles, nephews and niece. He was preceded in death by grandparents Alton Crone, Neal and Audrey Andreasen; and father-in-law Gary Williby and grandmother in law Daisy Williby. In lieu of flowers memorials may be directed to the family for later designation.

The family of Andrew Dwain Andreasen created this Life Tributes page to make it easy to share your memories.

Send flowers to the Andreasen family.