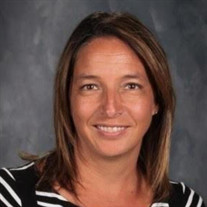 A Live stream of the service is available at YOUTUBE: https://www.youtube.com/channel/UCuehkOyrZGFBrg8F3LCSEGg FACEBOOK: https://www.facebook.com/groups/163883280403150 Amy Marie Murray, age 46 of Blair, passed away December 23, 2021 after a two and a half year battle with cancer. Funeral services will be held Monday, December 27, at 10:30 AM at First United Methodist Church in Blair. Graveside services will follow in the Blair Cemetery. A reception will be held following graveside services at Cottonwood Cove Marina, 10270 Riverside Lane, Blair, Nebraska. Visitation will be held Sunday, December 26 with family receiving friends from 12 to 2 PM at Campbell Aman Funeral Home. Amy was born on June 17, 1975 in Grand Island, Nebraska, the daughter of Raymond and Lois Mueller Jr. Amy grew up in Lincoln, attending and graduating from Lincoln Southeast High School. She then attended the University of Nebraska in Lincoln graduating with a Bachelor of Sciences in Social Sciences. Amy began teaching with Omaha Public Schools after college. On October 6, 2001, she was united in marriage to Timothy Murray in Omaha. In 2007, Amy began teaching at Blair Community Schools in the Social Studies Department. In 2009, she earned her Master’s Degree in Educational Leadership from Doane College. Amy was a sponsor for Student Senate, Quiz Bowl, and helped with scholarship committees at Blair Schools. She was a member of First United Methodist Church in Blair. Amy will always be remembered for her dedication and care for her students, her love for her family, palm trees and the Kansas City Chiefs. Amy is survived by her husband Tim; children: daughters Payton and Samantha and son Nathan; parents Raymond and Lois Mueller Jr.; sister Cheryl (Paul) Hasty; father and mother-in-law Thomas and Janice Murray; brother-in-law Ted (Julie) Murray; along with aunts, uncles, nieces, nephews, cousins and friends. She was preceded in death by her grandparents and brother-in-law Thomas C. Murray. In lieu of flowers, the family asks that memorials may be directed to the Washington County Foundation Amy Murray Memorial Scholarship Fund.

The family of Amy Murray created this Life Tributes page to make it easy to share your memories.

Send flowers to the Murray family.