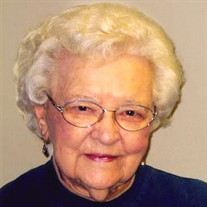 Alta Fetherhuff, age 102, of Ft. Calhoun, Nebraska passed away on January 20, 2018 at Good Shepherd Lutheran Community. Visitation will be held Wednesday January 24, 2018 at Campbell Aman Funeral Home with family receiving friends from 6:00 to 8:00PM. Funeral Services will be held at 10:00AM Thursday January 25, 2018 at Church of the Nazarene in Fremont, Nebraska. A visitation will be held at Spitzer Miller Funeral Home in Aberdeen, South Dakota on Friday January 26, 2018 from 10:00AM to 12:00PM with graveside services following in Sunset Memorial Gardens. Alta Reisdorph Fetherhuff was born January 9, 1916 to Charles William and Effie Mae Marlow Reisdorph at Houghton, South Dakota where she grew up and attended elementary school. She attended high school in Hecla, SD and graduated with the class of 1934. She attended Northern Normal Teachers College in Aberdeen, SD for one year and taught school for four years in rural Brown County. She was united in marriage to Ravone Fetherhuff on December 28, 1939 in the Wesleyan Methodist Church in Houghton. They lived on the Fetherhuff family farm for three years where their son, Arden was born. They bought their own farm at Huffton, SD in 1943, where their three daughters, Rita, Ila, and Ronna were born. In 1953 they purchased a larger farm near Columbia, SD, where they lived for forty years. Alta was a stay-at-home mom until their children were all in school. In 1958 she continued on to pursue her Bachelors Degree from Northern State College in Aberdeen, which she received in 1965. Alta taught at Daly Corner School, Columbia Public School and Aberdeen City Schools for 21 more years until retiring in 1978. Alta and Ravone traveled extensively. They were active members of the Houghton Wesleyan Church and Aberdeen Alliance Church. Alta was a co-leader of a bible study in the Columbia area for 14 years. After her husband Ravone died in 1992, she moved to Primrose Community Center in Aberdeen where she was involved in many activities. She also was a volunteer at St. Luke’s Hospital in Aberdeen. After moving to Blair, NE in 1995 to be near family, she became a member of Monday Afternoon Club, Christian Women’s Club, We Care & Share Group, and Methodist Women’s Circle. She attended Christ Community Church in Omaha and First Christian in Blair, where she became a member in 1998. Since 2009, she has attended Fremont Church of the Nazarene where she was also active in bible studies. In 2011, Alta moved to Autumn Pointe Assisted Living Community in Ft. Calhoun, NE. She has been an avid participant there. She loved crafts, flowers, gardening and sports. Church and her family were her first priorities. Devotion to Christ as her Savior was the dominating influence in her life. Grateful for having shared her life is her son: Arden (Sharon) Fetherhuff of Castle Rock, CO; three daughters: Rita (Tom) Pfeil of Frisco, TX, Ila (Joe) Hill of Nicholasville, KY, Ronna (Craig) Saylor of Blair, NE; nine grandchildren: Steve Fetherhuff, Dana McMillan, Sara Cunningham, Troy Stowell (deceased) Doug Hill, Denise Hill, David Hill, Heather Rudolf, and Chad Saylor; nine great grandchildren: Luke, Josh, Cameron, Kendall, Nyssa, Julia, Carter, Landon and Mason. She was preceded in death by her husband Ravone, two sisters: Ellen and Rachel; two brothers: Charles and Eugene; and one grandson Troy Stowell. Memorials may be directed to Fremont Church of the Nazarene, Blair Fire and Rescue or Salvation Army.

The family of Alta Fetherhuff created this Life Tributes page to make it easy to share your memories.

Send flowers to the Fetherhuff family.