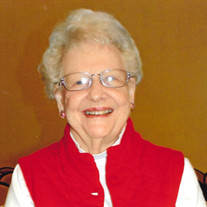 Alice M. (Knudsen) Schattauer died peacefully in her room at Carter Place, Blair, Nebraska, where she had lived with her beloved cat, Lily White, since suffering a stroke last March. In her last days, she was surrounded by family and friends,... View Obituary & Service Information

The family of Alice Schattauer created this Life Tributes page to make it easy to share your memories.

Alice M. (Knudsen) Schattauer died peacefully in her room at...

Send flowers to the Schattauer family.