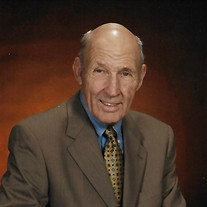 Alfred Fredrick Johnson Jr. age 87 of Blair, passed away November 7, 2017 at Crowell Memorial Home in Blair, Nebraska. Funeral services will be held at 10:00 AM Saturday November 11, 2017 at First Lutheran Church in Blair. Visitation will be held one hour prior to services. Graveside services will be held at 1:30 PM Saturday at Evergreen Memorial Park Cemetery at 2300 S 78th Street in Omaha, Nebraska. Alfred Fredrick Johnson Jr. was born January 7, 1930 in Omaha, Nebraska to Alfred Fredrick Johnson Sr. and Rachel Bartlett Johnson. He graduated from Omaha Technical High School in 1947. He then attended the University of Nebraska – Lincoln where he was a 3 year letterman in wrestling and was a member of Delta Sigma Phi fraternity. He graduated with Bachelor of Science in Agricultural Economics in 1951. Following graduation, he served his country in the Korean War from 1951 to 1953 where he was honorably discharged with the rank of 1st Lieutenant in the U.S. Army. He also received three medals including 3 Bronze service stars with his Korean Service Medal. Shortly after his return, he began courting the love of his life, Marjorie Jean Jacobsen. They were married July 18, 1954 and celebrated 63 years together this year. Johnson spent 15 years working for Swift & Company before leaving the white-collar world for his passion of farming and raising a family. Al served as State Director of the Nebraska Pork Producers, a member of the Washington County Livestock Feeders, and also served on the Governor’s Board for Humanities. He was a member of Kiwanis Club of Blair and served as their President in 1990-1991. He was member of First Lutheran Church in Blair for over 50 years, serving on the Church Council. Johnson also was on the Board of Directors of Good Shepherd from 1990 to 2003. In his free time, Al enjoyed traveling to visit their children in Montana, Kansas and Colorado. Additionally, Al was an avid hunter and fisherman. He hunted elk, deer, pheasants, and turkey in Nebraska, South Dakota, New Mexico, and Texas and also went to Alaska and Canada to fish for salmon, trout, walleye, and pike in addition to fishing numerous lakes and streams in Nebraska. Survived by wife Marjorie, sister Suzanne, brother Robert (Sally); three children Linda (Steve); Sandy, Bruce (Maura); four grandchildren Stephen (Kim); Laura, Audrey, and Ava, and one great grandchild Ella.

The family of Alfred Fredrick Johnson Jr. created this Life Tributes page to make it easy to share your memories.

Send flowers to the Johnson family.